First of all I’d like to take this opportunity to correct a minor grievance. The term ‘Brexit’ has always bothered me as Northern Ireland does not form part of Great Britain. In the interests of inclusivity shouldn’t the short-hand term for the United Kingdom’s retreat from the EU be ‘UKwit’? Anyway, as I said, it’s a minor grievance and one that I won’t lose too much sleep over.

What might, however, bring about a degree of restlessness is the United Kingdom’s declining energy consumption per capita when we compare 2017 to the period prior to 2005. And, in particular, how this underpins the debate surrounding the UK’s continued membership in the EU. So consider yourselves thoroughly forewarned as to where this is heading.

“The Schengen Area is one of the greatest achievements of the EU. It is an area without internal borders, an area within which citizens, many non-EU nationals, business people and tourists can freely circulate without being subjected to border checks. Since 1985, it has gradually grown and encompasses today almost all EU countries and a few associated non-EU countries.”

It would be hard to argue that this expense incurred by the UK is a significant strain on the public purse in a growing economy. However, it is the latter part of that statement, ‘growing economy’, that I wish to draw attention to. As we saw in the previous post a growing economy is a derivative of growing energy consumption. Yet, it would be erroneous to assume that this growth applied equally to everyone. Viewing the economy through the lens of the UK’s Energy Consumption per Capita (Chart 1) offers an alternative view of this otherwise rosy picture.

On an energy consumed per capita basis the UK economy began its decline after 2005 having held the 160GJ line for a decade. This decline has not been offset through efficiency gains in energy utilisation which could otherwise claim to boost economic output through lower energy consumption. The following two charts help explain why; 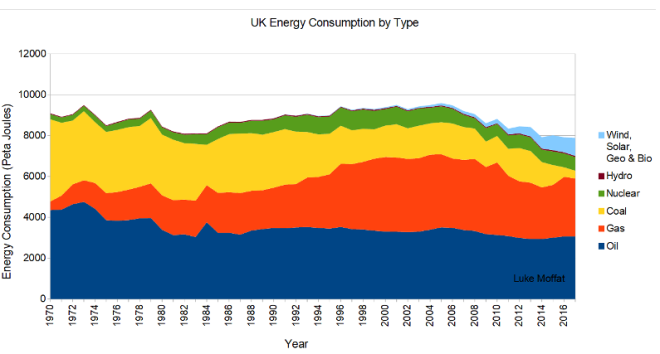 What we are looking at is a continued dependence on fossil fuels to run the UK economy whilst the quality of those same fossil fuels is diminishing. Add to that a rising population (Chart 4) and declining energy consumption (Chart 2) and we end up with reduced energy consumption per capita (Chart 1) not on an efficiency basis but on an affordability basis (Chart 5). In summary, adding more people to the UK economy since 2005 has not boosted economic growth per capita – instead it has eroded economic growth per capita.

Chart 5 – Energy Spend as a Percentage of Total Household Expenditure (1993 – 2016). Chart from https://www.ofgem.gov.uk/data-portal/energy-spend-percentage-total-household-expenditure-uk

Now we have two problems;
1) The UK is producing energy of diminishing quality
2) The UK doesn’t produce enough energy to remain energy independent.

As a point of interest, even during the miners strike of 1984 the UK energy situation didn’t look as perilous as it does today.

Why should any of this concern us? And why should it make the UK’s membership in the EU untenable?

With the UK’s declining domestic oil and gas production, combined with lower oil and gas prices, lets see what that does to UK tax revenue from North Sea oil and gas (Chart 8);

The OBR explains the decrease in tax revenue as follows;

“The fall in receipts has been driven by falling production, much lower oil and gas prices and higher tax-deductible expenditure. The rate of petroleum revenue tax and the supplementary charge have also been cut substantially.”

Now lets look at UK private debt on a per capita basis (Chart 9) as further proof of the UK’s declining prosperity;

Chart 9 – UK Private Debt per Capita in GBP (1963 – 2015). Financial data from Bank for International Settlements. Population data from the UN.

Perhaps I should have begun this article with Chart 9 as I assume people are more attuned to rising debt per capita than declining energy consumption per capita as a tell-tale sign for declining prosperity. The reason I didn’t do this is because the origins of our problem are energy related. As explained in the previous article, energy is the economy. To elaborate further an economy has four fundamental stages;